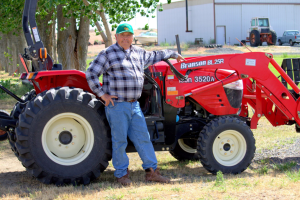 Terry Tallman grew up working on the family farm in Adrian, Oregon. After graduating high
school in 1964, he continued that work until joining the Navy during the Vietnam War in 1969.
Serving aboard the USS Kitty Hawk, Terry was responsible for maintaining the ship’s ultrasound
systems and repairing various aircraft.
It was through the Navy that Terry met Cheryl, his wife of 48 years. While stationed in California
the couple was introduced by Cheryl’s brother, Steve DeBoer, with whom Terry served. The two
were married in 1974 following Terry’s discharge from the Navy. Terry then took the opportunity
to attend college at both the University of Oregon and Oregon State University before returning
to the family farm in Adrian. Inspired by the development of irrigated agriculture in the Columbia
Basin at the time, Terry and Cheryl moved to the Boardman area in 1978.
After establishing a successful custom farming operation in Boardman with his brother Tim,
Terry began to focus on community service. His efforts and success on the City of Boardman
Planning Commission led numerous community members to encourage him to run for Mayor, a
position he won and held for five years. In 1999, Terry successfully ran for County Judge of
Morrow County, which he won and held for 18 years, the longest in Morrow County history.
Following retirement from public service, Terry was able to spend more time doing things that
he loved. Fishing trips with his family and road trips visiting friends and family around the
country were two pastimes that took him out of Oregon. And, of course, his favorite: planting
and tending to his beloved flowers, watermelon, cantaloupe, and vegetables. In 2019, he and
his wife opened a coffee shop called “The Farmer’s Cup” on the family farm in Boardman.
Through the coffee shop, Terry was able to show his love of community and create a place for
people to enjoy each other’s company, converse, buy and eat fresh produce, and walk through
the garden where that produce was grown.
Terry loved the Lord and was involved with The Navigators Christian ministry. He and his wife
supported many pastors, missionaries, and believers who devoted themselves to sharing the
Gospel locally and abroad. His faith was the rock and foundation of his life as he served the
Lord steadfastly throughout his years.
He was preceded in death by his parents Keith and Billie Tallman and sister Marilyn Nelson
Heldenbrand.
Survivors include his wife, Cheryl; brother-in-law, David Heldenbrand; brother, Tim (and Lois)
Tallman; sister, Evelyn (and Mike) Gobler; his children: Jonathan Tallman, Crystal (and Shawn)
Hempel, Derrin Tallman; granddaughter, Cora Hempel; nephews: Jimmy (and Amber) Nelson,
Mike (and Sandy) Tallman, Chris Tallman, Mike J Gobler, Ben (and Ciara) Graybill; nieces:
Kelsey (and Rich) Kowald, Charlotte (and Jaye) Divine, Christine (and Brian) Benson, Shannon
(and Rudy) Falsis, Cindy Gobler, Shanna (and Luke) Simonson, Katie Heldenbrand, Aubrey
Graybill; many great-nieces, great-nephews, and close friends.

In lieu of flowers, the family requests donations to the ministry of Andy and Anne Hermanns via InFaith
(https://www.infaith.org/andy-anne-hermanns).

Burial will follow at the Riverview Cemetery, Boardman, Oregon.

Please share memories of Terry with his family at burnsmortuaryhermiston.com

To send flowers to the family or plant a tree in memory of Terry K Tallman, please visit our floral store.