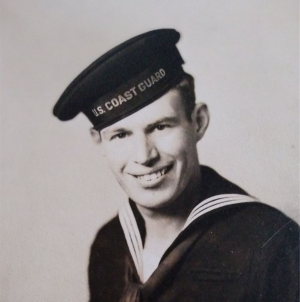 Richard Rehfeld, a pioneer farmer of the Basin City, Washington area, quietly passed from this world on Tuesday, June 14, 2022. From childhood he displayed the spirit of independence and adventure which his ancestors brought from England, Scotland, and Germany to America where they soon headed west. They eventually settled on the Oregon coast in Goldbeach and Marshfield (now Coos Bay) Oregon where he was born on September 26, 1922. He spent his childhood in Marshfield, Lakeview, Oregon, and Santa Rosa California. Many summers were spent working on his aunt and uncle's ranch on the Klamath River. Leaving High School early, he went to work as an electrician's helper, eventually becoming an IBEW apprentice electrician.
In 1942 Richard joined the U.S. Coast Guard in Seattle. HIs first assignment was on the USCG Cutter Haida out of Seattle deployed on "weather watch" in the North Pacific. As the ship did not have a berth for a Fire Control (gunnery) rating, he was put ashore when it returned to Seattle. Richard worked his way down the Pacific Coast filling a variety of berths until he reached San Francisco where he joined USN LST 970 as lead Fire Control (gunnery) rating of a crew firing an anti-aircraft gun mounted on the bow of the boat. LST 970 was enroute to Japan loaded with men and equipment for the invasion when the atom bombs were dropped. Instead of participating in an invasion, LST 970 was involved in the occupation of Japan. The boat made trips between the Philippines and various ports in Japan. Richard separated from the Coast Guard on November 26, 1945.
Richard returned to Santa Rosa where his father lived and resumed his electrical training, eventually turning out as a Journeyman Electrician. While visiting the local swimming pool, He became re-acquainted with the love of life, Marjorie Joan Elton whom he married. Together they raised three boys: Zane Barry, Rodney, and Joel. Richard always said life was good then and did not understand why he responded to an advertisement for individuals interested in developing raw land in the Bureau of Reclamation Irrigation Project in Eastern Washington with veterans' preference. Following a process of interviews and a tour of available farmland, The Rehfelds received the notice they had been awarded eighty acres of farmland which needed to be proved up with a dwelling and improvements to the land. In the Spring of 1956, the Rehfeld Family moved to the farm, living in a dilapidated surplus duplex from the former Naval Aviation Training Station at Pasco Washington. Pasco was thirty-five miles away from the farm, Othello twenty-five miles and Mesa fifteen miles (where there wasn't much). Besides an old farmhouse a mile away, there were only two houses in the valley, including the Rehfeld's. Basin City did not exist except in the mind of wheat rancher, Loen Bailie. The lack of neighbors soon changed as other families developed their farms.
Richard was able to work as an electrician in Othello until there was income from the farm. Once he was able to work his farm full-time, Richard became an outstanding farmer recognized for his talents. He was also involved in various plans by area farmers who were interested in infrastructure development in the area which would enrich the farming community. The real opportunity arrived with the afore mentioned dream of Loen Bailie. Basin city became a reality. Richard was Secretary/Treasurer of the Basin City Development Corporation which installed the first water system in the fledging community to entice agriculture related businesses. The group also erected stock holding pens with a scale to facilitate shipping livestock. Recognizing a shortage of housing for farm laborers, they also built the Basin City Farm Housing. In his capacity as treasurer, Richard was responsible for collecting fees and rent as well as doing a whole lot of other things. When it was time to build a fire station in Basin City, Richard, still a licensed Journeyman Electrician, held a temporary Electrical Contractors license in order to wire the firehouse/community hall.
With all of their boys away from home and having enlarged the farm acreage to more than what Richard and Marjorie could easily take care of, they decided to retire, residing at various times in the Port Townsend area, Pasco, Reedsport and eventually Coos Bay. Following Marjorie's death and a short stay in Pasco, Richard headed back to Coos Bay where eventually ill health caused him to move to Hermiston, Oregon in order to be closer to son Joel who lived in Kennewick. Again, ill health caused him to move again. This time to Kennewick where he lived in assisted living facilities until his death.
Richard was trying for a hundred years but did not quite make it. He outlived all of his Basin City friends and neighbors. His passing marks the end of an era for the farm community.
In his life, Richard had been a member of the Franklin County Cattlemen, the Pasco Elks, Basin City Volunteer Fire Department, Life Member of the IBEW and Board member of the Basin City Development Corporation.
Richard was preceded in death by his mother, Ida Patricia Beebe (Elmer) and father Walter Alonzo Rehfeld (Eva); beloved wife, Marjorie Joan; son, Zane Berry Rehfeld, and much-loved daughters-in-law Diona Adams Rehfeld (Zane Barry) and Ardith Burkhart Rehfeld (Rodney).
Richard is survived by sons Rodney (Hellen), and Joel (Marsha): Granddaughters Cheryn Castro (Ray), Cindy Spytex (Danny), Kimberly Rehfeld, Ketra Stumpf (Jay), Krista Fenton (Rick); numerous grand-children and great-great grand-children.
A mountain of gratitude to the caring staff of Heart Links Hospice who recognized Richard's physical needs and qualified him for their care. Thank you, Robert and Veronica, Heart Links staff members who made his life easier while under your care. To the staff of Royal Columbian Assisted Living, who, in his last days stepped up to assist him, thank you.

He will be miss by many!

At his request there will be no service.
Please share memories of Richard with his family at burnsmortuaryhermiston.com
Burns Mortuary of Hermiston, Oregon is in care of arrangements.

To send flowers to the family or plant a tree in memory of Richard Rehfeld, please visit our floral store.

A Memorial Tree was planted for Richard