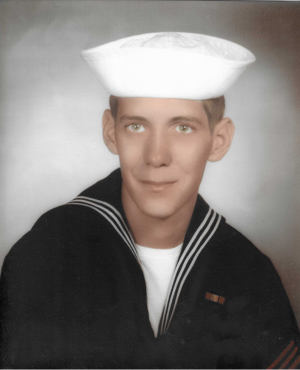 The family lived in Milton-Freewater at the time of his birth but moved all over the state Oregon, following his father’s constructions jobs.  Larry graduated from Riverside High School in Boardman in 1972, then joined the United States Navy.  He proudly served our country in the Vietnam War, before being honorably discharged in 1976.

Larry then settled in the Hermiston area and joined the security guard force at the Umatilla Army Depot, where he worked until 1997.  He never really stopped working though, as he continued to take on various local jobs and countless side projects for friends and family, from small engine repair to helping build his cousin Brett’s cabin.  Larry had a passion for understanding how things worked and an insatiable need to take things apart and try to improve them.

Larry loved to hunt, fish, and attend NHRA drag races.  He was also a movie buff, regularly frequenting Hemiston’s theater and drive-in over the years.  He loved his community and his AA family.  Heck, Larry loved everyone.  He was extremely selfless and had a heart of gold.  He offered support and even opened his home as a refuge to many friends in need.  Perhaps most of all, he loved his dogs; first Buddy, then Rex, then Dietz.  Even if you didn’t know his name, you saw him all over Hermiston with a dog by his side.

He is survived by his brothers, Daniel (Jan) Shoemake of Boardman, OR and Richard Shoemake of Western Oregon; and half-brothers Ron (Debbie) Shoemake of Litchfield, AZ and Ken (Jera) Shoemake of Pasco, WA as well as countless nephews and nieces, cousins and extended family.

He was preceded in death by his parents.

The family would like to specifically thank the Hermiston community for all the love you returned to Larry over the past 40-plus years.  He was not without his struggles, and in times of need, we were amazed by the support and generosity you all showed.

A family gathering will be announced at a later date.

Please share memories of Larry with his family at burnsmortuaryhermiston.com

To send flowers to the family or plant a tree in memory of Larry W Shoemake, please visit our floral store.