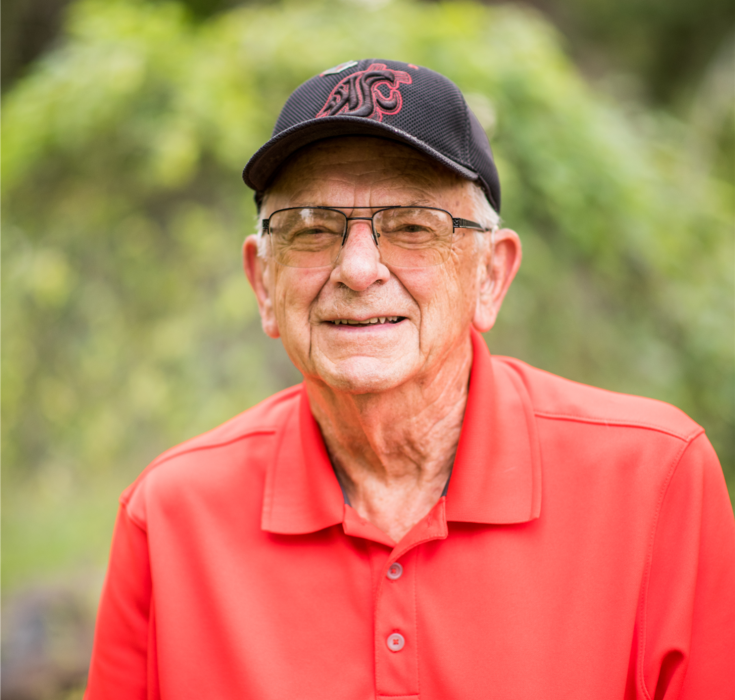 Jerome Omer “Jerry” Sobotta was born to George Sobotta and Ann Grieser Sobotta on February 12, 1936, in Arcadia, Wisconsin. He passed away March 21, 2021 surrounded by family in his home at the age of 85 years.

Jerry attended schools in Lapwai, Idaho, where he met his childhood sweetheart Kay Maxwell.  Jerry and Kay married as he attended Gonzaga University where he played basketball, and then Washington State University where he became a lifelong Cougar.  After receiving a degree in Pharmacy, he went to work as a pharmacist in Richland, Washington, and later purchased Hermiston Drug with his brother Jack, also a pharmacist. They expanded by adding a second store, Orchard Pharmacy, located near the medical center.

To describe Jerry in one word, it would be “kind”. He loved each member of the family (and many an extended family member) for who they were, he supported each of us in whatever we desired to do. We felt it.  He dispensed good, kind and always smart advice, but only if asked. He was a spiritual man who always felt blessed, even though his good planning, his kindness, his positive attitude, and his hard work-- along with his faith--were the true reasons for his success and the success of his children and grandchildren.  He coached, he encouraged, but most of all, he believed in and was confident in our individual ability to complete a degree, find a job, or marry the right person.  No matter what though, we, his children and grandchildren always knew he would love us and would be there to pick us up and dust us off, if we failed.

He was a true athlete. He played basketball for Gonzaga University, then supported family members in playing almost every kind of sport, but mostly he was a believer in just staying active.  He attended many, many sporting events to watch children, grandchildren, (or their friends) or just someone he knew from his home town, Lapwai, Idaho. He is now in heaven, watching the Men’s and Women’s NCAA Championships and looking forward to a Gonzaga championship and the baseball season.

Because of the limitation on gatherings due to the Pandemic, a family mass will be held at Our  Lady of Guadalupe Catholic Church in Boardman, Oregon with burial to follow at the Hermiston Cemetery, Hermiston, Oregon.

In lieu of flowers please make contributions in Jerry’s memory to the Hermiston Little League or the Agape House c/o Burns Mortuary of Hermiston, P.O. Box 289, Hermiston, OR 97838.

Please share memories of Jerry with his family at burnsmortuaryhermiston.com

Plant a tree in memory of Jerome "Jerry" O Sobotta

Jerry treated everyone he knew with care and kindness , consistently going out of his way to help others. He will be missed but never forgotten.
Mick

Hi my name is Jorge Llerenas and I'm probably pretty sure you may not remember me. I have a brother named Henry, that Jerry gave him a job to work at the pharmacy, it was like emptying trash and stuff like that, and sometimes I would tag along.. I do have one memory of Jerry. He was the only one that ever came to my baseball game. I remember I hit the ball and when I looked over at Jerry, he gave me a great big cheer😊. That was awesome how it gave me confidence and I'll never forget it. I wanted to see him before he passed. I live in Arizona now. He really inspired me to do better. My condolence to the family. Kay may remember us.

Jerry was always so kind.  He always had a smile and loved to Talk.  He Will Be missed by all. Our thoughts and prayers to Kay and family. Bill and Kathie Mallory

I have had the pleasure to know Jerry for many years. He was always at local ballgames especially Stanfield baseball. His kindness and friendship was treasured for the many years I called on him as he owned and operated Orchard Pharmacy. I am going to miss him

Many (MANY) years ago I was a Home Health nurse and Jerry helped me so much getting supplies for patients.  I didn't even know what I needed half the time, but he knew.  I will never forget his kindness and his humor..  There are few truly good men and the world has lost one of them.  My sincere condolences to you all.

Plant a tree in memory of Jerome "Jerry" O Sobotta