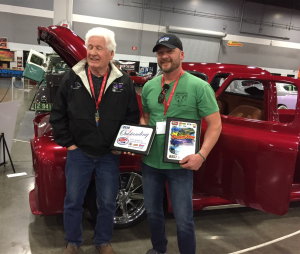 Gerald Ray McBee passed away on October 7, 2021 with his family by his side. He was born on July 24, 1940 in Elsberry, Missouri to parents,  Harry M McBee and Blanche (Kay) McBee.

Gerald was united in marriage to Danice Johnson on August 28, 1980.

During his early childhood the family traveled southern states, Arizona and California, where his father worked construction. At The age of 9 the family moved to Athena, Oregon then to Helix where he graduated from Helix high school in 1959. He enjoyed playing football and baseball. After graduation he and his twin brother Jerald, enrolled in the Pendleton Technical School, now Blue Mountain Community College. Gerald studied autobody repair and paint. His brother studied mechanics and automotive chassis. They worked together on Jerald’s wheel stander the “Defiance”. After graduating from technical school he managed the auto body repair shop for Rohrman Ford. During that time he developed a lasting friendship with Leonard Ware. He worked at Ware’s .Autobody for over 30 years.

In his early teens he was interested in many things. He built glider airplanes and was currently working on a motorized glider with a 6 foot wing span. At the age of 14 he became a licensed taxidermist. He was an excellent shot with a bow and arrow, searching out birds and small animals to practice his taxidermy skills. His mother was a good sport allowing him to display them in her living room . When he was 16 he mounted a Golden Eagle for the Pendleton Eagles Lodge.

But his true passion was building hot rod cars. His talent was admired by many people and he developed lifelong friends who shared his passion. He followed the Good Guys motto “ you gotta drive em” and he did. He and Danice toured with the Good Guys and Jerry Dixie of the National Street Rodder Association many times. The longest tours were to Columbus, Ohio, Minneapolis-St Paul and York, Pennsylvania.

He was preceded in death by his parents, twin brother Jerald and infant son Shannon McBee.

A celebration of life will be held on October 23 from 2:00pm to 4:00pm at the Maxwell Siding Pavilion, 255 N First Street, Hermiston.

In lieu of flowers please make remembrances in Gerald’s memory to Vange John Memorial Hospice Education Fund or a charity of your choice.

Please share memories of Gerald with his family at burnsmortuaryhermiston.com

To send flowers to the family or plant a tree in memory of Gerald, please visit our floral store.