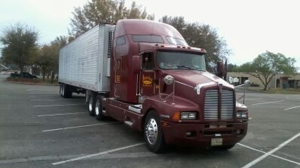 Armando Garcia of Hermiston was born October 28, 1964 in Mission, Texas the son of Trinidad and Olga (Medelez) Garcia. He passed away on Sunday July 7, 2019 in Spokane, WA at the age of 54.

Armando lived in La Grulla, Texas during his childhood. He later lived in Washington and graduated from Toppenish High School in the class of 1982. He then joined the US Marine Corps where he served for four years and achieved the rank of Corporal.

In 1989 he moved to Hermiston, Oregon where he has resided for the past thirty years. He worked as a truck driver throughout his career, twenty years for Medelez Trucking and for the past ten years as a self employed truck driver.

Amando enjoyed going to the movies with his son, going to the casino and playing card games such as gin rummy and poker.

He was preceded in death by his father, Trinidad; and a half brother, Freddy.

To send flowers to the family or plant a tree in memory of Armando Garcia, please visit our floral store.